Guest Lecture at The Florence Institute of Design International

On February 14th, 2018, FIDI hosted a guest lecture by Agnese Angelini on the theme of corporate identity & brand identity.

Agnese Angelini is a very successful Italian designer who has maintained a substantial position in the world of design for the past twenty years.
She began the lecture by introducing herself as a person and a professional, discussing the experiences she has acquired over her career and the various firms she has worked with and for, some examples among them being Landor and FutureBrand. 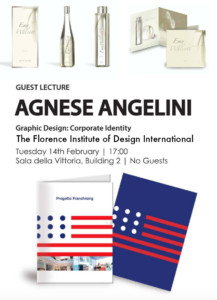 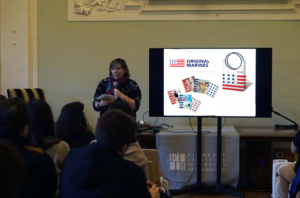 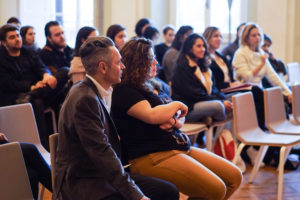 Agnese Angelini is currently a freelancer and specializes in brand personality building, she collaborates with multiple prestigious European brand agencies. Along with her career,

For her lecture on corporate branding she extensively went over the process of three main projects of hers, including the rebranding of Original Marines, in Italy and the development of the brand personality of a Italian restaurant in Rome, “Palatium.
Although each project was an example of corporate branding, the variation within the three was an interesting insight into the intricacies of the world of design. Especially within Graphic Design, which has countless fields of specialties, seeing the variation in corporate branding was refreshing. The difference between companies, the service they provide/institution they represent, significantly impacts not only the approach to the design but also the relationship between the client and the designer. For instance the brand, “Original Marines,” already had a corporate image as well as a desire to not stray far from the initial design of the logo and identity. Angelini explained the process of developing different possibilities which not only maintained aspects of the original design but also led the client to choose the most aesthetically and commercially successful. In this case she ended up developing three identities to their near full potential before the client made his decision. 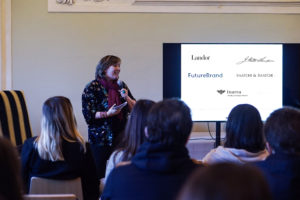 She discussed her process in developing signage, the separation of different sections of the complex, as well as showing the final outcome of the project. “Palatium” stood as a great example of personality branding. To begin with, the client being an Italian family created a more personal connection.

The restaurant also was meant to represent the food and atmosphere of a certain region, which added more personality to the design. Due to this project being a restaurant which already had a desired image developed, the design of the logo heavily relied on this pre-exisiting feeling, or the desire of the client to communicate a certain atmosphere.

Agnese’s design not only did an excellent job of representing
the atmosphere of the restaurant but it also maintains a simple elegance
that is difficult to achieve in design.

After the lecture, students were afforded the opportunity to ask questions as a group and then again afterwards, personally, at a small reception hosted by FIDI.